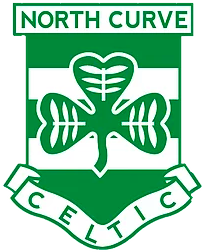 What is North Curve Celtic?

North Curve Celtic is a fan collective which currently represents over 1000 Celtic fans within the Standing Section (North Curve) at Celtic Park.

Why was North Curve Celtic formed?

The initiative was introduced by the Green Brigade for season 2016/17 with the main objective of building a united fan front for the Standing Section.

For a variety of reasons, the Green Brigade is notoriously difficult for fans to join and can also be pretty divisive. North Curve Celtic provides an alternative platform for all fans who want to contribute more to the matchday atmosphere and have a say on fan issues without necessarily subscribing to the Green Brigade.

What are the objectives of North Curve Celtic?

Can anyone join North Curve Celtic?

Why should I join North Curve Celtic?

By joining North Curve Celtic, you strengthen the influence of the collective when it comes to creating a positive, vibrant atmosphere not just at Celtic Park but on the road.

You have the opportunity to join us on the road by joining our away registration and forming sections at away grounds where we’ll recreate the same vibrancy now synonymous with Celtic Park’s Standing Section.

You have your chance to influence fan issues, particularly those concerning your area of Celtic Park which ultimately affect your matchday experience. As most will know, the Standing Section has been under scrutiny since its introduction and NCC reps have been effective in defending the area, working together with club officials on pragmatic safety measures and been successful in fending off unnecessary, intrusive measures.

What do I get from joining North Curve Celtic?

As well as the above, you will receive an exclusive member’s scarf and membership card.

You will have access to exclusive North Curve Celtic merchandise, events and information which are restricted to members only.

You will have exclusive access to tifo setups and flag/banner productions.

You have exclusive access to a private, members-only platform where issues concerning the North Curve can be discussed, important information can be shared, and decisions can be agreed.

We are determined to improve the overall members experience and have various ideas to help with this.

Each season we will commit to:

How do I join North Curve Celtic?

Sign up tables will be at the bottom of the stairs at Area 111 (beside NCC logo mural) inside Celtic Park. Membership costs just £10 per season.

How do I keep up to date?

As a group we rely on members contributions and donations in order to create and carry out our displays. If you would like to contribute to future actions, click on the link below to donate through PayPal. Thank you for your support.

Check out our online shop for a limited selection of Ultras Celtic merchandise. Our full range of merchandise can be purchased in the Celtic Supporters Association prior to home games.