On 17th August 2016, Celtic hosted Israeli side Hapoel Beer-Sheva in a Champions League Qualification fixture. It was some weeks prior however, when both clubs were drawn together, that the narrative surrounding the fixture began. Celtic have a renowned left-wing fan base and coupled with the strong Irish nationalist identity it is not unusual to see regular shows of solidarity with Palestine on the terraces. Indeed, the club had been fined by UEFA two years prior for its fans flying Palestinian flags against Iceland’s KR Reykjavik. With an Israeli outfit due in Glasgow, much was made of the potential actions of the Celtic support and more so the repercussions of such.

A club rich in history, particularly such that extends beyond football, it is of no surprise that Celtic supporters cherish and nourish the social ethos which they believe separates them from all others. Its ultras group, the Green Brigade, are arguably the figurehead of these efforts. With a history of Palestinian solidarity, from simple support banners to more ambitious projects, they have forged relationships in Palestine – namely in Aida Refugee Camp, Bethlehem. Notably, Palestinians in the West Bank have even shown solidarity banners with the Green Brigade for their own struggles – a humbling thought but evidence of the mutual respect.

Preceding the Beer-Sheva fixture was a predictable media rhetoric influenced by UEFA, Celtic FC, Police Scotland and even some Celtic fans who would rather sporting headlines than political. In spite of this, the Green Brigade showered their section of the ground with Palestinian flags. Although an iconic image in itself, it was what followed which is most telling of the Celtic support and the entire, global Palestine solidarity campaign.

As promised, Celtic would be charged by UEFA for its supporters’ actions – the resulting fine being £8,600. Defiant still, the Green Brigade launched #MatchTheFineForPalestine with the hope of doing
exactly as their hashtag declared. Incredibly, the appeal quickly became global with donations flooding in from worldwide supporters as the story simultaneously grew in exposure. As the initial ‘UEFA fine’ target was smashed, new targets were set with each continuously being surpassed.

From Gaza to the West Bank, Palestinians showed their support and thanks for the campaign: photographs of children and medical volunteers displaying the appeal hashtag appeared; video messages from Aida Camp filtered through; and a Gazan football team posed alongside a ‘Thank you Celtic…love from Gaza’ banner whilst lining up for a match. Amidst the widespread donning of Celtic shirts and flying of makeshift Celtic flags and banners by the locals, a massive Celtic crest was projected onto the side of a West Bank building. It was actions like these which lay the foundations for a legacy beyond this campaign.

Ultimately, a remarkable £176,076 was raised and split between two beneficiaries. Medical Aid for Palestine (MAP) are a British charity that provides immediate medical aid to those in critical need, while also developing local capacity and skills to ensure the long-term development of the Palestinian healthcare system. The Lajee Center, from Aida Camp, are a grassroots creative and cultural centre that works with new generations of Palestinians as they continue their ongoing struggle for justice and rights for Palestine and all Palestinians. Importantly, the latter had a relationship with the Green Brigade which predated these events and more significantly provided a base to build from.

Almost two years have passed since the donation was handed over. Although the money raised has and continues to make a difference, plans have been at work in the background to cement a stronger, lasting legacy. 2019 brings the official launch of Aida Celtic, a football academy representing Aida Camp. Managed locally by the Lajee Center and supported internationally by the Green Brigade, it is hoped that Aida Celtic will benefit from similar levels of support and generosity afforded to the campaign which lay the foundations for its formation.

Integral to the success of Aida Celtic is the support network that it will rely upon and the strategy for regalvanising the fervour which surrounded the #MatchTheFine campaign. The exposure created by that appeal spread awareness of the Palestinian plight and enticed relationships to flourish. Several celebrity figures contributed to the appeal at the time and Roger Waters even had the catalytic Palestine flag display of 17th August 2016 on reel, during live concert, for his worldwide audiences. Some understandably preferred to remain anonymous – anon* have chosen not to.

It would be foolish for those behind Aida Celtic to expect the same financial backing as that which we’ve previously covered – which is why partnering with popular fashion distributor and marketer A Number of Names* could prove vital. Anon* may not be a high street name however are well established in the merciless market of fashion and retail. Whilst the cynical may question the motive of the partnership, the astute will recognise that Aida Celtic must generate income in order to fulfil its aims. Aside from designing and supplying a quality kit for the teams to play in, the familiar hooped shirt will also be launched publicly with all proceeds to Aida Celtic.

For now, Aida Celtic’s aims are simple and modest – to provide young Palestinian refugee footballers with a fully equipped and financed football setup. With the correct stewardship, guidance and international support it is hoped that Aida Celtic will flourish from humble beginnings just like the club they borrow their name from. The Celtic name is universal, the kit iconic, the story cherished, and their supporters revered. Aside from the significant backstory here, Celtic provides a perfectly poignant platform for another successful underdog story. It is a universal belief that football can break barriers and bring hope – it is hoped that Aida Celtic, who sit in the shadow of an illegal separation wall, will be the next example of this.

Please note due to manufacturing timescales all deliveries will be sent 1st Class, recorded and insured. 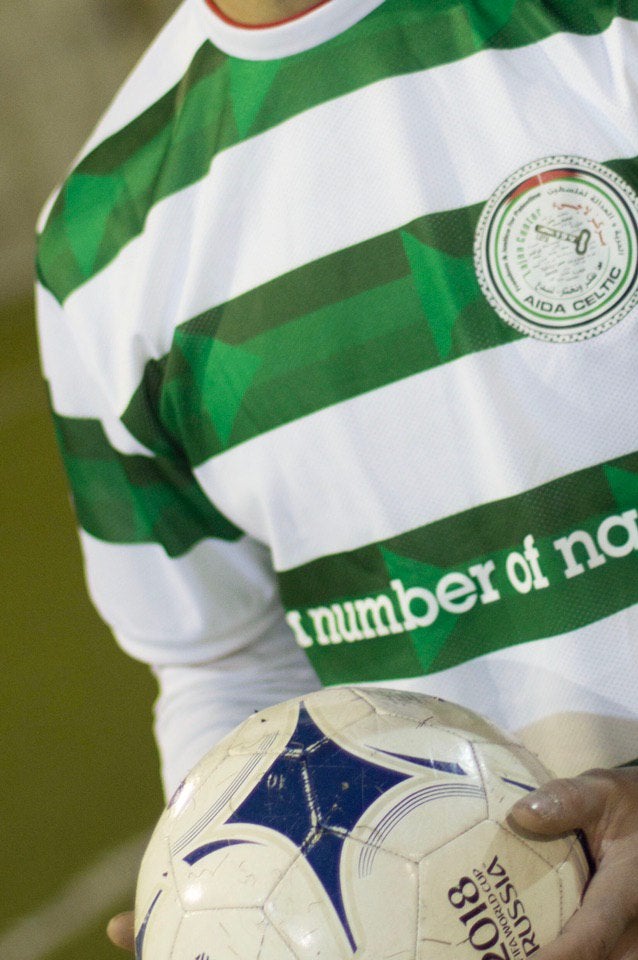 As a group we rely on members contributions and donations in order to create and carry out our displays. If you would like to contribute to future actions, click on the link below to donate through PayPal. Thank you for your support.

Check out our online shop for a limited selection of Ultras Celtic merchandise. Our full range of merchandise can be purchased in the Celtic Supporters Association prior to home games.